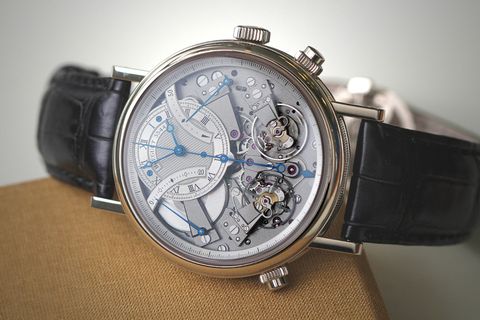 Sometimes, you just have to let beauty speak for itself. At Baselworld last year I sat through a slide-show presentation in which the radical, multi-patented intricacies of Breguet’s newest chronograph were explained at painstaking length. We heard tales of blade springs, non-concentric going trains, balance wheel brakes and variable frequencies, and the drawbacks of dual power reserves. It was… befuddling. But actually, in hand, that’s the one thing this watch doesn’t need to be.

The Breguet 7077 Tradition Independent Chronograph is, at the simplest level, a quite electrifyingly lovely chronograph, with pushers that are as soft as butter to operate, and whose open working and glorious finishing provides an unusual and dizzying spectacle of frosted parts, tumbling wheel, flicking blued hands.

Okay, obviously it’s far more than that, but it would be nothing if it didn't fulfill the most elemental satisfaction of a top-end chronograph – that sense of mechanical interaction that you get when you operate it. And in fact, the Tradition 7077 ramps that up, thanks to the way it seems to burst into life when the chronograph is switched on.

That’s because there are two movement trains here, with two escapements and two large balances arranged symmetrically on the lower half of the dial. That also means two silicon hairsprings – Breguet being a pioneer of the material's use in horology – with the famous Breguet overcoil on full show, and two symmetrical escape wheels and pallet forks beneath.

The movement train on the right governs normal timekeeping, and is therefore always running; but the one on the left governs only the chronograph. Switch on the chronograph, and suddenly everything is moving: the two balances and escapements dancing away as the chronograph seconds hand sets off around the dial.

The horological reasoning is the same as that behind Jaeger-LeCoultre’s Duometre Chronographe: keeping timekeeping and chronograph operations separate prevents the one impacting the accuracy of the other. The difference here is that the Breguet Tradition 7077 has only one mainspring barrel, powering the timekeeping element (with a 50 hour power reserve). You can see it on the left below, beneath the gorgeously guilloche-decorated dial. The retrograde power reserve indicator is on the right, opposite the chronograph minutes indicator.

It may be a short amount of timing, but it’ll be an accurate 20 minutes, because the chronograph balance has a higher frequency (5Hz) than the timekeeping (3Hz) balance – as with Zenith’s El Primero, faster oscillations mean greater accuracy in recording time.

That's complicated in itself when one of the key objectives of this watch, and a source of its attractiveness: its symmetry. You'd normally expect the higher frequency chronograph balance to be smaller, given that it has a far greater number of oscillations to make without running out of power. Not in this case. Breguet has kept things - *ahem* – balanced by making the chronograph balance out of lightweight titanium – you can tell because it's a slightly darker shade.

Which is all well and good, but consider this: there are no numbered markings here, either on the chronograph seconds track around the dial, or on the retrograde chronograph minutes scale.

So just what, one might reasonably ask, is the point of an ultra-accurate 20-minute chronograph with no numbers to give a clear reading?

Well, it’s because the Tradition 7077 is a watch that’s really far more about theory and spectacle than it is about function. Who needs a chronograph anyway? No one. But this is something strangely purer: it’s almost like an academic research treatise on chronograph mechanics, but one realised with all the finishing and austere panache of an haute horlogerie art piece. It satisfies in all the ways a chronograph should, without needless functional distractions.

That's especially the case when you turn the thing over, to be greeted by an incredible array of arcane gears, wheels, bridges, arms and jewels. It's one of the most original chronograph movements I've ever seen, and – if you're so inclined – it can be pore over for hours.

Three prominent bridges point down to an anchor-shaped device at the bottom. This is the chronograph lever, which moves left and right as you operate the two pushers situated on either side of the case, at 4 o'clock and 7 o'clock. You can also spot the time-keeping power reserve display indicated by a polished pointer on the edge of a dangerous-looking serrated gear.

This is a watch that's really rather brilliant in both concept and execution – as brilliant as we've come to expect from Breguet's Tradition line, which is all about getting to the essence of watchmaking, and showing the workings in the process. But it's brilliance is much in its beauty as anything. One can sit and fuss over blade springs, frequencies and the like, or just sit back and enjoy the show.