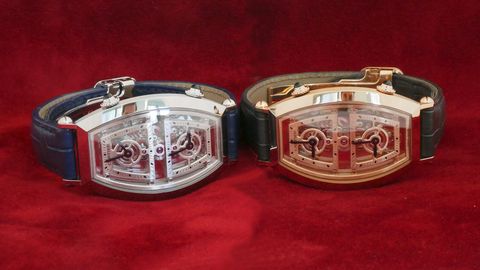 I used to be a member of a club, you know. It was called the Cartier Fine Watchmaking Club, and it involved a trip to Switzerland each year, prior to SIHH, to enjoy solemn lectures on the brand’s latest in-house advances in front-line, top-tier, everything-and-the-kitchen-sink horology. These were manifested in the huge timepieces of the Fine Watchmaking Collection (FWC), saucer-like creations decked out in complications so vaultingly ambitious and over-engineered that they required flow-charts, equations and diagrams to explain them.

It was all suitably mind-boggling; but it was also pretentious and quite silly, with ungainly watches that, for all their ingenuity, seemed the opposite of the effortlessness, simplicity and deep instinct for beauty and form that made Cartier Cartier. The opposite, indeed, of landmark designs like the Tonneau, the curve-sided rectangle first produced in 1906 – a languidly elegant child of the Belle Epoque that was a long-time fringe favourite in the Cartier catalogue.

Well, the club has been disbanded, the flowcharts ditched and the Fine Watchmaking Collection, wisely, put to bed – and the Tonneau has returned. It follows last year’s glorious, unexpected revival of the 1920s cracker the Tank Cintree, and establishes a new pattern for connoisseur-facing limited editions, with a new classic shape from the past revisited each year, under the title Cartier Privé. That harks back to early-Noughties Collection Privé Cartier Paris, which similarly revived older looks with new horology, in the days before the brand’s development of its in-house workshops lead to the rise of the FWC.

So we have a duo of manually-wound, two-hand beauties in rose gold or platinum that relive the old look but with all the luxury and poise of modern craftsmanship, and containing a dinky new hand-wound Cartier movement. They’re thoroughly charming.

But what really diverted my attention was the pair of skeletonised dual-time versions that accompanied them – at first sight, sigh-inducing throwbacks to the affected complexity of FWC. But on closer inspection, and especially on the wrist, they show just how good all the genius and skill formerly poured into the Fine Watchmaking Collection could be, when tamed by the careful principles of classical Cartier design.

It really shouldn’t work – and, arguably, in Cartier’s pictures it doesn’t quite. Too much going on, too many surfaces and angles, too showy. What the hell would you even wear it with? However, one of the key things about the Tonneau is that its curves, both along its flanks and in its concave form over the wrist, serve to mould it ergonomically around the arm, and make it a swell thing to wear. That very much applies to the Tonneau Skeleton, which despite being described by Cartier as “extra-large” is slim by comparison to modern tonneau staples like Richard Mille and Franck Muller. It’s 29.8mm in diameter (compared to, say, 39.7 for a Richard Mille automatic like the RM21), and with its narrow strap and curving polished bezel, it feels smaller still.

In years past, this might have had show-off complications thrown in, but engineering ingenuity has here been put to good purpose. Cartier previously made a dual-time Tonneau in the old Collection Privée. That watch used two little movements that needed to be set independently – effectively two watches in one case, for different time zones.

Here, however, things are much cleverer. There’s a single movement that controls both time displays, with the extensive geartrain arranged along a central axis between 12 and 6. However, what to do about the fact that that axis gently curves? The solution in the other watches is that the movement is absolutely minuscule – 16mm x 12.9mm, meaning it sits in the centre of the curve (the fact that there are 121 parts in that, with 38 hours power reserve, is impressive in itself). With the much larger movement of the Dual Time filling out the case, Cartier had to actually make that geartrain itself follow the curve, with angled cutting on the barrel and the escapement wheel (sitting at either end of the gear train) enabling a gently contoured arrangement.

There are still two crowns, each capped with a sapphire cabochon, but they have different purposes. The top crown sets the over-all time, and winds the movement; while the lower one is in fact a pusher for moving the hour hand of the bottom display in one-hour increments. The movement, Calibre 9919 MC, has 197 parts, a frequency of 28,800 vph, and delivers a rather impressive 60 hours minimum power reserve.

On the wrist, for the few minutes I was able to give it a try, it’s a real pleasure. The finishing is very fine, as you’d expect, and it’s perfectly easy to read, while its facets, angles and contrasts make it something to really enjoy too. It actually has a kind of retro sci-fi quality to it: there’s something a bit Flash Gordon about its mix of razzmatazz, tech and pure style – the latter being the element that was sorely missing from so many of Cartier’s most technical watches over recent years. I think it would make a rather spectacular black tie watch, in either the platinum or rose gold, but it could be worn in other ways too. Understated it isn’t; but unusual, arresting and replete with elegant finesse, not to mention a dose of true eccentricity, it most certainly is. And from Cartier, that’s as it should be.

Advertisement - Continue Reading Below
More From Reviews
The best dress watches for under £5,000
The best alternative watch choices under £2,000
Advertisement - Continue Reading Below
Hero product: the A. Lange & Sohne Odysseus
The best dive watches under £5,000
Bremont Jaguar D-Type chronograph review
The best alternatives to the Rolex Submariner
The best chronographs for over £10,000
The Sidereus Newgrange
The best chronographs under £10,000
Review: The Nomos Glashütte Club Sport Neomatik